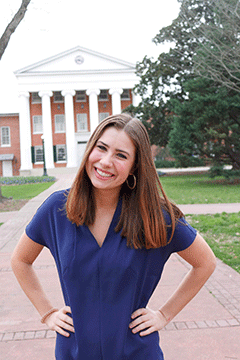 When and why did you decide to study your major?
In middle school, I began getting involved in theatre and got bit by the theater bug. I am from Huntsville, Alabama, and there are a large number of very active community theaters there.  I was enriched by this environment, but I saw many organizations go bankrupt and have to close their doors.  I decided to double major in theater and accountancy.  My dream job is to be a director of finance for a theater company.

Do you feel a sense of community in your department?
Yes—100 percent! The Department of Theatre and Film is relatively small and we spend a lot of time together. If you walk into Isom Hall, where the department is, it’s evident how close we are. The lobby is always filled with students eating, running lines, and having fun. The best friends I have made at college are members of the theatre department.

Do you feel that professors have mentored you?
I am on texting basis with a large number of my professors in the department! Michael Barnett, who is the chair of the department, has particularly been a huge mentor of mine. It was Michael who pushed me to try lighting design, which is now one of my biggest passions.

Have you been given out-of-classroom opportunities in your department?
I have been very lucky to have had many opportunities. I am a teaching assistant for Theatre 201, and I am also help hang and set up all the lights for each production. This year, I am actually working on every production in the department!  I’ve been a lighting designer and part of the costume crew.  This semester I’ll be a stage manager.

What are your extracurricular activities?
I am currently the treasurer for the Associated Student Body, the director of fundraising and events for the Ole Miss Food Bank, the business manager for Ghostlight Repertory Theatre, and a group leader for the Big Event, the largest community service project at UM. 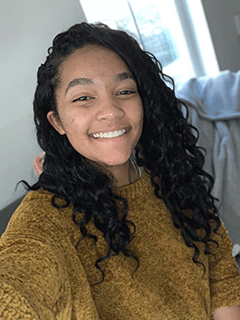 When and why did you decide to study your major?
I was in the sixth grade when I watched Howl’s Moving Castle, an animated movie.  I was blown away by the colors, the sound design, and the detailed and engaging story.  Ever since then, I’ve wanted to be deeply involved in the film industry.  I majored in film production because it touches on every aspect of the filmmaking process and will help me be a well-rounded worker.  Sitting in a dark room and constantly praying for Avid, our editing program, not to crash is where I feel most at home now!

Do you feel a sense of community in your department?
Yes!  Even though theater and film are two different types of art, the students and faculty who focus on one or the other are extremely friendly.  We’re a tight-knit department.  When I first walked into Isom Hall, film and theater kids were sprawled across the floor, everyone laughing and having a good time.

Do you feel that professors have mentored you?
All of the professors that I’ve had so far have influenced my work ethic.  I came into the program wanting to be a writer and director, but I took one class with a professor I especially like, and after that I really wanted to become a film editor and sound designer.

Have you been given out-of-classroom opportunities by your department?
My professors are always sending me emails about local jobs as a production assistant, or working at a film festival.  I’m currently working on applications for editing internship programs in Los Angeles and New York, which a professor told me about.

What are you binge watching?
Peaky Blinders, Dark, and the entire Star Wars

More Information About the Film Emphasis

Our film curriculum is production based, offering you as many opportunities as possible to make films. Both the junior and senior years feature year-long, thesis style course sequences. In the junior year, the class collaborates to create one long-form project, such as a web series or feature film. In the Senior Capstone sequence, classmates break into small groups, and each group spends the entire year creating a professional quality short film.

More Information About the Acting Emphasis

In the Acting for Stage & Screen emphasis you will not only work in the studio program, you will also have the opportunity to participate in short films, full-length shows, musical theatre productions, showcases and student-produced productions.

More Information About the Design Emphasis

Our commitment to introducing our students to the most current technology has resulted in the installation of a new sound and rigging systems, an entirely new dimming system, the continued growth of our moving light & LED inventory, and the use of projection design in our productions. Through a mix of technical training, including wig ventilation, scenic painting, moving light programming and maintenance, and realized design experiences, our students graduate with a breadth of experience and knowledge.

More Information About the Bachelor of Arts

Any College of Liberal Arts student at the University of Mississippi can pursue a BA in the Department of Theatre & Film. A Bachelor of Arts degree allows students with a variety of interests to create a personalized curriculum.