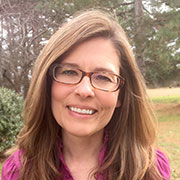 Carey Hanson is a Professor of Costume Design at the University of Mississippi. Her costume experience has covered a wide range of theatre, dance, opera, musical theatre, and theatre for youth. Carey has worked professionally with The Santa Fe Opera, Utah Opera, Utah Festival Opera and Musical Theatre, Unicorn Children’s Theatre, Sundance Summer Theatre, Old Lyric Repertory Company, Harper Joy Theatre, The Pink Garter Theatre, and Playmill Theatre-Jackson. Carey has worked professionally in the costume industry since 1991 and has been teaching costuming in higher education since 2000. Her most recent costume designs include Clybourne Park, Eurydice, The Seagull, Oedipus the King, Hair, And Then There Were None, The Mystery of Edwin Drood, and Six Characters in Search of an Author. She received a Kennedy Center American College Theatre Festival Faculty Costume Design Nomination for Eurydice and Oedipus the King.

Carey has been actively involved in the United States Institute for Theatre Technology. She has served as the Vice Commissioner of Communication for the Costume Commission as well as a Director on the USITT Board of Directors. In addition to the courses Carey teaches on the University of Mississippi campus, she has developed study abroad courses dedicated to exposing students to theatre performance and design. Carey is a member of the Costume Society of America. As a costume historian, her research focus is early American children’s wear and textile production. She has traveled abroad and throughout the Eastern United States in order to gather primary information for her continuing research. Most recently, with the support of the department of Theatre and Film as well as the College of Liberal Arts, she is developing a historical clothing collection for students interested in studying historical garments.