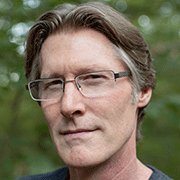 Alan Arrivée is a filmmaker, writer, and artist. He is Associate Professor of Film and head of the BFA in Film Production Program in the Department of Theatre & Film at The University of Mississippi. His short film SILENT RADIO was awarded Best Foreign Film at The European Independent Film Festival 2007 in Paris, and his short THE ORIGINAL I.Q. TESTER received the Founder's Choice Award at the 2015 Queens World Film Festival. His short play THE ORIGINAL I.Q.TESTER was a finalist for the 2007 Heideman Award and was published in The Tusculum Review. His memoir THE APPROPRIATE USE OF HANDS appeared in The Florida Review and was selected by editor and founder of The Best American Essays series Robert Atwan as one of the Notable Essays of 2012. Alan is also a founding member of the cinema and cinematic theatre group Cine Persona. He is currently working on a feature-length iPhone film titled THE WONDER OF THE WORLD…, a series of ‘Afghan’ paintings and sculptures, and is writing a series of short memoirs set in his childhood home of Monterey, California. He lives in Oxford, Mississippi with his wife, historian Frances Courtney Kneupper, and their two daughters.